Whilst operating across multiple countries comes with many perks, it can also come with some complexities with different countries having different rules as well as traditions during seasonal events such as Christmas.

At Edays, we believe that annual leave is important. We also believe in celebrating traditions as well as ensuring that companies operating over multiple countries adhere to laws, rules and regulations. We’ve pulled together some statistics on holiday entitlements and maternity entitlements as well as sharing some of our favourite traditions from around the world. 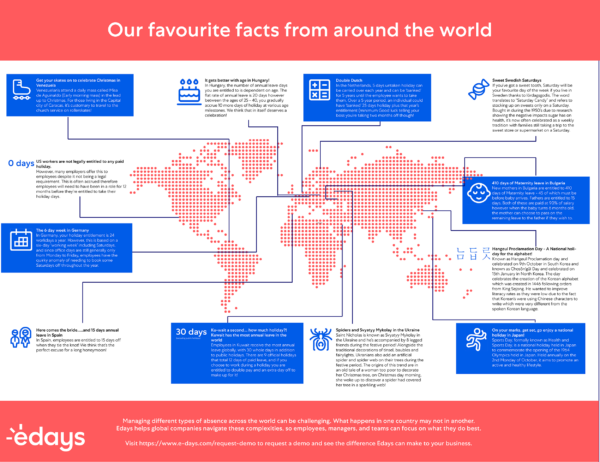 Get your skates on to celebrate Christmas in Venezuela
Venezuelan’s attend a daily mass called Misa de Aguinaldo (Early morning mass) in the lead up to Christmas. For those living in the Capital city of Caracas, it’s customary to travel to the church service on rollerskates!

US workers are not legally entitled to any paid holiday.
However, many employers offer this to employees despite it not being a legal requirement. This is often accrued therefore employees will need to have been in a role for 12 months before they’re entitled to take their holiday days.

Ku-wait a second… how much holiday?! Kuwait has the most annual leave in the world
Employees in Kuwait receive the most annual leave globally, with 30 whole days in addition to public holidays. There are 9 official holidays that total 12 days of paid leave, and if you choose to work during a holiday you are entitled to double pay and an extra day off to make up for it! In contrast, Canadians are only guaranteed 10 days off, which amounts to 2 weeks of holiday (though after five years of work this goes up by 50%).

Hangeul Proclamation Day – A National holiday for the alphabet!
Known as Hangeul Proclamation day and celebrated on 9th October in South Korea and known as Chosŏn’gŭl Day and celebrated on 15th January in North Korea. The day celebrates the creation of the Korean alphabet which was created in 1446 following orders from King Sejong. He wanted to improve literacy rates as they were low due to the fact that Korean’s were using Chinese characters to write which were very different from the spoken Korean language.

410 days of Maternity leave in Bulgaria
New mothers in Bulgaria are entitled to 410 days of Maternity leave – 45 of which must be before baby arrives. Fathers are entitled to 15 days. Both of these are paid at 90% of salary however when the baby turns 6 months old, the mother can choose to pass on the remaining leave to the father if they wish to.

It pays to get married in Spain and Japan
From tying the knot and jetting off for your honeymoon (15 days), to moving house (1 day), paid leave is given for life’s major events in Spain. Similarly, in Japan employees get 5 days’ holiday for getting married.

Spiders and Svyatyy Mykolay in the Ukraine
Saint Nicholas (or Santa as you may know him) is known as Svyatyy Mykolay in the Ukraine and he’s accompanied by 8 legged friends during the festive period! Alongside the traditional decorations of tinsel, baubles and fairylights, Ukranians also add an artificial spider and spider web on their trees during the festive period. The origins of this trend are in an old tale of a woman too poor to decorate her Christmas tree, on Christmas day morning, she woke up to discover a spider had covered her tree in a sparkling web!

Sweet Swedish Saturdays
If you’ve got a sweet tooth, Saturday will be your favourite day of the week if you live in Sweden thanks to Lördagsgodis. The word translates to “Saturday Candy” and refers to stocking up on sweets only on a Saturday. Bought in during the 1950’s due to research showing the negative impacts sugar has on health, it’s now often celebrated as a weekly tradition with families still taking a trip to the sweet store or supermarket on a Saturday.

Double Dutch
In the Netherlands, 5 days untaken holiday can be carried over each year and can be ‘banked’ for 5 years until the employee wants to take them. Over a 5 year period, an individual could have ‘banked’ 25 days holiday plus that year’s entitlement. Good luck telling your boss you’re taking two months off though!

The six-day week in Germany
In Germany, your holiday entitlement is 24 workdays a year. However, this is based on a six-day ‘working week’ including Saturdays, and since office days are still generally only from Monday to Friday, employees have the quirky anomaly of needing to book some Saturdays off throughout the year. Meanwhile across the border in France, the ‘year’ you calculate holiday in is actually 13 months, from June 1 to June 30 the next year.

It gets better with age in Hungary
In Hungary, the number of annual leave days you are entitled to is dependent on age. The flat rate of annual leave is 20 days however between the ages of 25 – 40, you gradually accrue 10 more days of holiday at various age milestones. We think that in itself deserves a celebration!

Navigate complex leave rules and working patterns for 50+ countries around the world.

Go to the global compliance hub 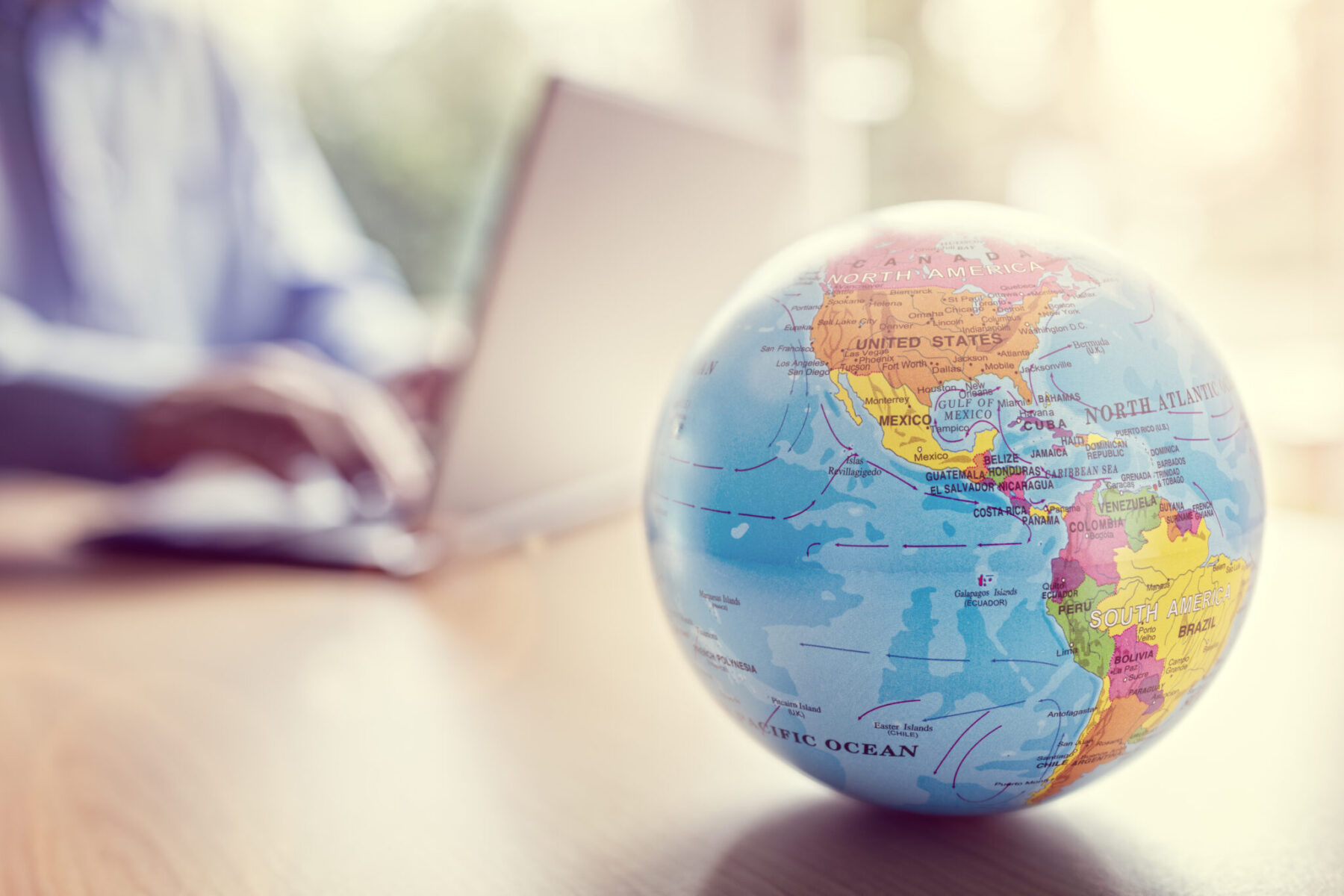 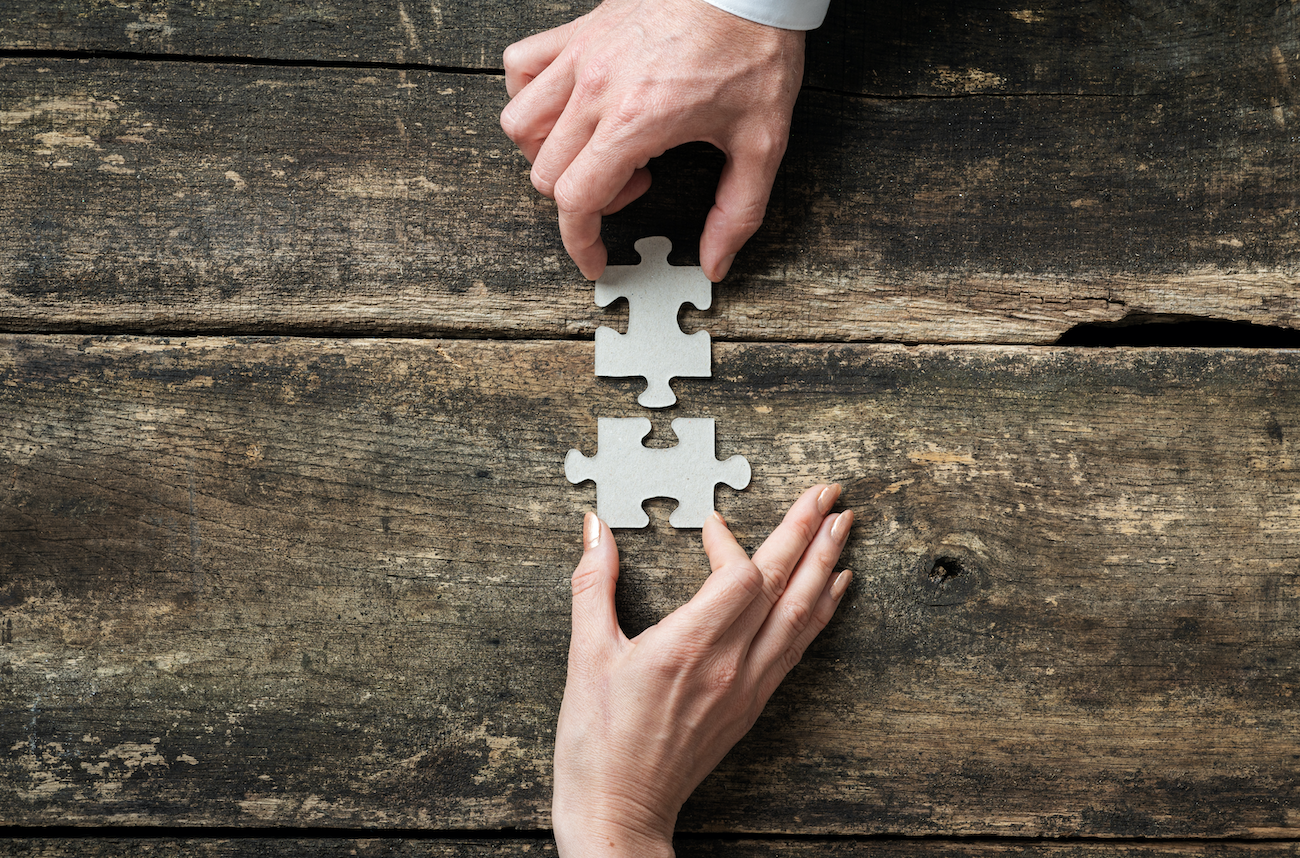 Global growth through merger or acquisition: 8 reasons why you must consider employee absence

By Edays Admin | Business Growth, Global | 7 min read
Read more
Join 250,000 people enjoying Edays monthly insights!
Our website uses cookies that help us and third-party partners remember you and improve your experience browsing our site. You agree to the use of all cookies or you can change your settings.
Cookie settingsACCEPT
Manage consent